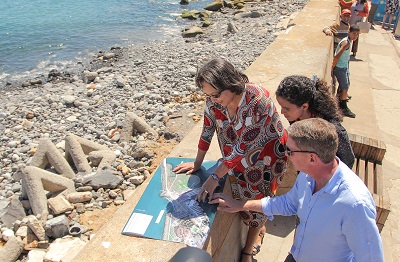 Today I visited the site of one of the City of Cape Town’s modular land-based desalination plants. The plant will produce 2 million litres of water per day and this water will be fed into the City’s water distribution network by February 2018.

Last week I made a commitment to communicate directly with all Capetonians about the City’s work to secure alternative water sources.  My message is clear: we have a plan, we will supply water but Capetonians, your help is vital and so we need you to keep saving.  I want to thank and commend Capetonians for their great efforts and for being partners on this journey by saving water.  We managed to bring consumption down to 585 million litres of collective use per day from pre-restriction consumption levels of 1,1 billion litres per day.

We will not allow a well-run city to run out of water.

The City is securing our water resilience through saving and bringing more alternative water sources into our network.  One such water source is the temporary desalination plant the City is building on East Pier Road in the V&A Waterfront.  An open-air parking lot opposite the heliports will be converted into a desalination plant that will produce 2 million litres of water every day.  The V&A Waterfront made the land available to the City at no cost. This is a good example how government and business can work together to ensure our water resilience.  Water will be abstracted from the ocean on the harbour side of the pier, treated at the desalination plant and treated clean water will be pumped into the City’s water network near the site.  The location of the site makes it easy for the City to provide services to the desalination plant. The City will provide electricity in November 2017 and construction will start soon after.

These are for the following sites:

On Friday the City awarded the tenders to the desalination plants at Strandfontein and Monwabisi.  The City is also working on groundwater abstraction at Atlantis and Silwerstroom, Cape Flats Aquifer, Cape Peninsula and Hottentots-Holland aquifers.  The City has already managed to increase the production capacity of the existing Atlantis and Silwerstroom aquifer by 5 million litres per day. This will increase incrementally to 25 million litres per day.  At the Zandvliet Wastewater Treatment Works, the pipeline work has already started and the yield will rise incrementally from this source to produce 10 million litres per day.  I am continually assessing the City’s solutions to provide alternative water sources while Capetonians continue to save.

We are not only building water resilience in the immediate future, but also looking ahead to the years to come and how we ensure water security beyond 2018.