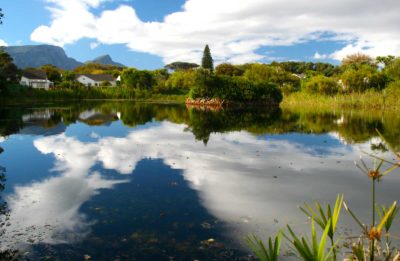 As part of our series of blogs, we are chatting about some of the ‘best-kept secrets’ of the hood, including conservation areas, restaurants, guest houses and the like. Die Oog is definitely one of Bergvliet’s best kept. So secret in fact, that most of the folk living in the Southern Suburbs do not know of its existence. And it is 300 years old! But those who do know, talk about treasured times with family and kids. A place to get away from it all, right here in the suburbs and a very special and cherished place.

Situated Cnr Lakeview and Midwood Avenues, Bergvliet, Die Oog is a natural spring or “eye” around which a dam was built 300 years ago to supply the Bergvliet Farm with water.  It includes a lake with an artificial island, a wetland, a garden and a small area of indigenous and endangered Peninsula Granite Fynbos. The recreational area has been planted with indigenous trees such as the unique and striking Silvertree, and the wetland is one of the few remaining breeding grounds of the endangered Western Leopard Toad

In 1685 Simon van der Stel was granted all the land from the almond hedge on the top of Wynberg Hill to Muizenberg on which he established the farm of Groot Constantia. After he died in 1716 the land was subdivided, and one third became Bergvliet Farm. The first homestead and the dam were built around 1726. The dam is clearly shown on the Surveyor General’s map of 1764 survey. The portions of the original land were sold off over the years to make other farms including Buitenverwachting, Sweet Valley and Klein Constantia.

In 1883 a surveyor, A Ackerman, described the “ancient dam” as being very strong and substantial with a wall 15 ft high and 200 ft long and an island built of ironstone. In 1904 Dr Frederick Purcell, Curator of the South African Museum and his suffragette wife Anna moved into Bergvliet Farm. He collected over 600 species of indigenous flora which are now in the Bolus Herbarium. In 1982 Bergvliet Farm was subdivided for housing development and the dam and the surrounding area was designated as a Bird Sanctuary and named Die Oog by the City of Cape Town. The land was overgrown and cleared by the Bergvliet and Meadowridge Ratepayers Association who formed “Die Oog Project” to care for Die Oog.

The FRIENDS OF DIE OOG as it is now known is funded mainly from donations by the local residents and visitors.

Now with level 2 Lockdown restrictions, Die Oog is open to the public again with some strict protocols and conditions.-Maintain social distancing
-Wear a mask
-Sanitise your hands before pushing the buzzer
-No sitting on benches

If you’d like to organise any event of 10 or more people, kindly consider donating R150 towards maintenance costs for Die Oog. For more info and learn how to donate, please go to https://dieoog.org.za/

A special place in the heart of a special hood!

Signing off “all good in da hood“